Last week my son and I had the chance to fly out to Hollywood for the Red Carpet Premier of Peter Rabbit. We also were able to sit down with the talent from Peter Rabbit for an interview! I wanted to share it with you guys today so you can get a little behind the scenes on what the movie is really like!

Make sure to mark your calendars for February 9th to check out Peter Rabbit yourself! 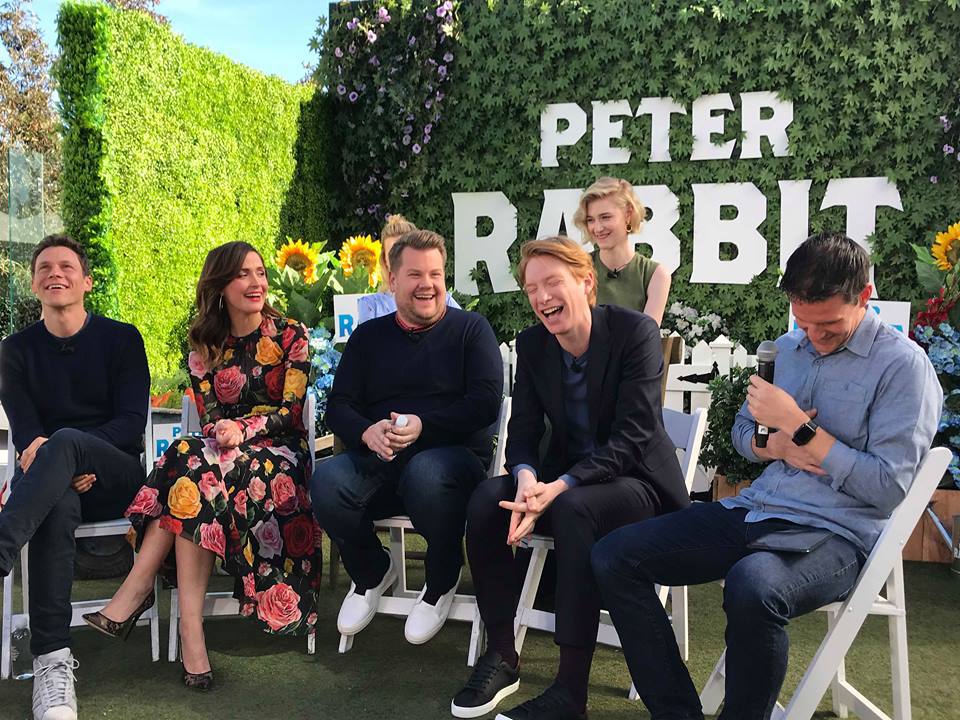 The Cast of Peter Rabbit

This interview was broadcasted live on Yahoo Entertainment, you can see the entire thing below!

Here are some of my favorite Moments

Q: Tell us about channeling your inner bunny for this role.

James Corden (JC): I don’t know that I ever.. In the conversations that we had with will it was never really about channeling an inner rabbit, it was mostly about how do we find a way to honor this character that is so beloved by Beatrix Potter. How do we unlock this kind of loveable, mischievous character that has been created in these beautiful books and honor it now in a film.

I feel very fortunate that I was able to work with a director and writer like Will who understood and understands the legacy of that character and the world that it lives in and more than anything just wants to reintroduce this character to some of the young people who then hopefully will then leave the movie theater and go and discover these incredible books.

I felt like an ever so slight fraud who stood between Domhnall and Rose who were out there really doing all this proper acting where I was just able to turn up in my pajamas and do this for a few hours at a time.

Q: Is that actually your method… you show up in your pj’s?

JC: Well, it didn’t really matter what I wore.

Q: But you wore something?

JC: Yes, I was very much clothed throughout the whole process. That would be really strange. 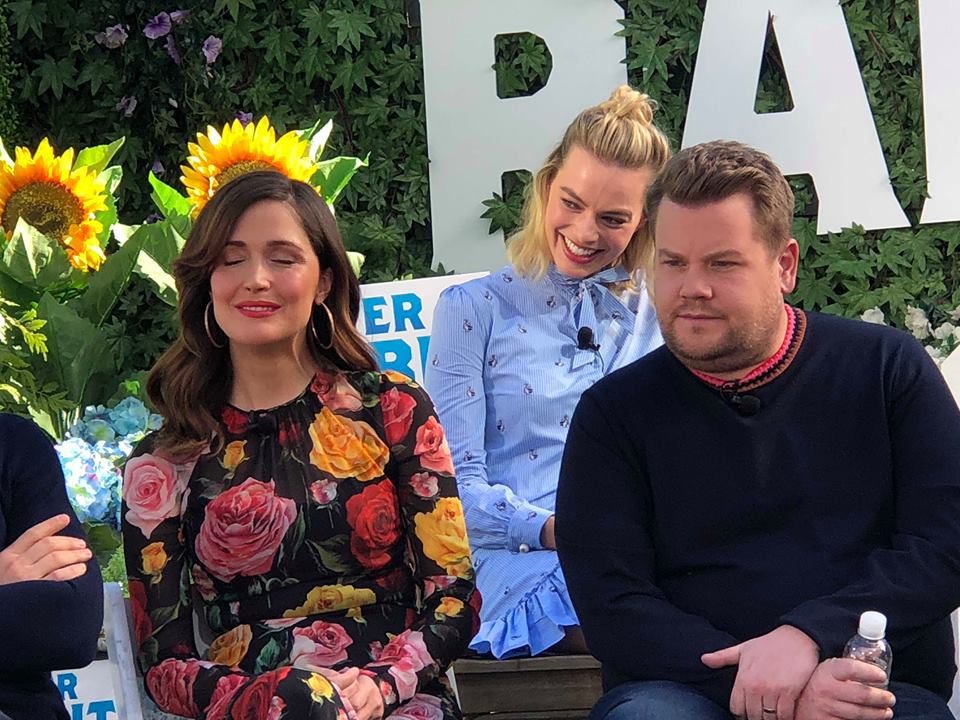 Margot Robbie (MR): “It was very fun. I hadn’t been involved in an animated/live-action film before, so it was a new process for me. It’s kind of liberating being the voice of an animated character where you can kind of concentrate on the voice as opposed to the physical actions, but I was very jealous that I was finally a part of the film that was at least some of it was shooting in Australia and I didn’t get to be there for the Australia portion, which is ironic. It was fun just exploring being a rabbit.

Q: How about you Elizabeth?

Elizabeth Debicki (ED):  I had a really lovely time as well.  I think finding the voice is so interesting when you make an animation because you contribute some and then you see what the character starts to look like because the animation grows and then that might change what you do with your voice a little bit. I also loved that when we were recording they film us and the rabbit’s sort of… you know when I watched the film for the first time I could sort of see us in the bunnies too, which is such a lovely thing to see.

I just loved Flopsy so much because of her sweet little lisp. I think it was the sweetest little voice I have ever heard.  Mopsy is not nearly as cute or adorable. I think she is bossier and a little bit more strong-willed. It was a really fun process. 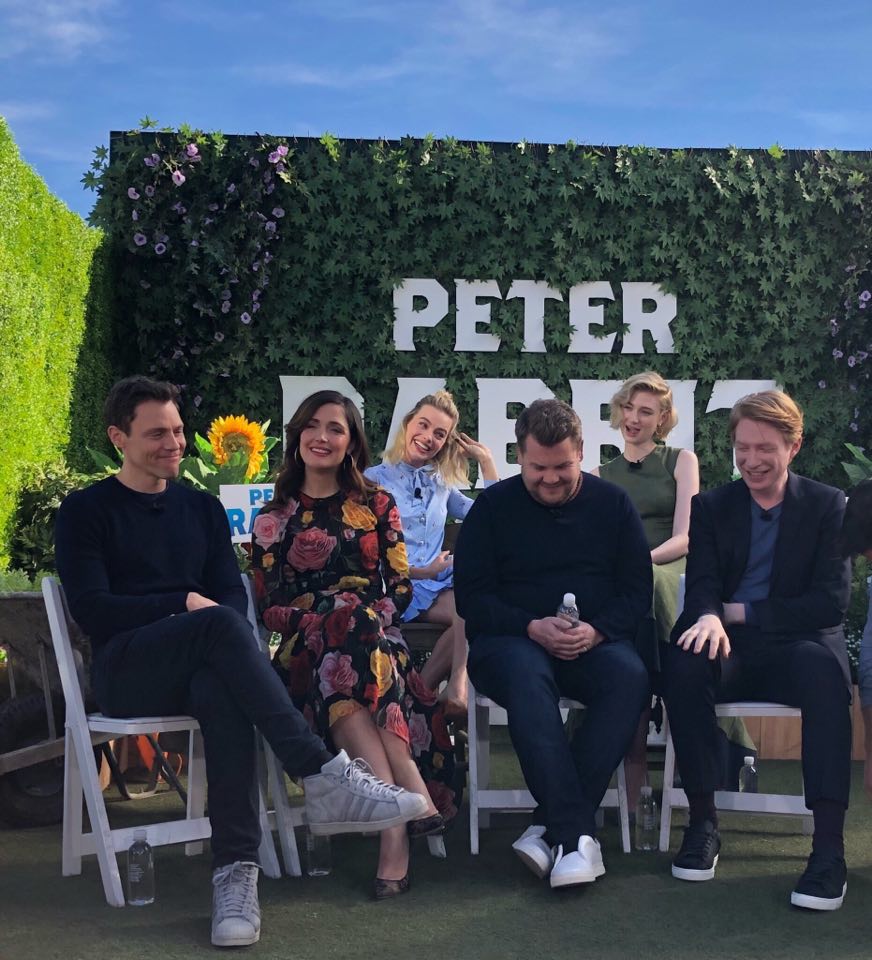 Tell us what the process for you entailed on set working opposite these CGI characters. What are you guys looking at throughout all this action… is it stuffed animals? A tennis ball?… how do you capture that?

Rose Byrne (RB): It was both, right? Tennis balls, men in blue leotards… what else was there… a glue stick. Yeah. (laughing).

Q: Is that a surreal experience? Does that get more normal as the days go on?

RB: It does. It’s weird. It’s like “where’s the blue ball? It’s my scene partner! Where did it go?” (laughing). You kind of adjust to it and gradually you catch yourself going “what am I doing, but you’ve got to commit, right?”

Domhnall Gleeson (DG): I think one of the central things of the film is that humans don’t know that animals can talk in the world that we exist in, so there wasn’t a lot going back and forth like conversation scenes with the rabbits, which I think probably helped a little.

Q: Mr. Will Cluck, Most of us are familiar with your work from comedies like, “Easy A” and “Friends with Benefits” and there is a very noticeable comedic vent to this movie; it is very, very funny.  How did you go about finding the tone of the film throughout the writing and the preproduction?

Will Gluck (Dir): It was a long process to figure it out, just as hard as it is for these guys to figure out how to work with a blue ball….that sounds weird…strange… that sounds like something you would have said Domhnall. (Laughing).

James and I had many, many, many different sessions where we did some of the rewriting and sort of figuring stuff out. Same with Margot and Elizabeth. I think this was a group effort trying to figure out where everyone comes from, but I know this sounds crazy, we try so desperately to try to keep it grounded in reality and what we thought, as James said earlier, what Beatrix Potter would smile down on us for, so that was the headline always was “does this make sense in her world” and we were very religious in that regard. 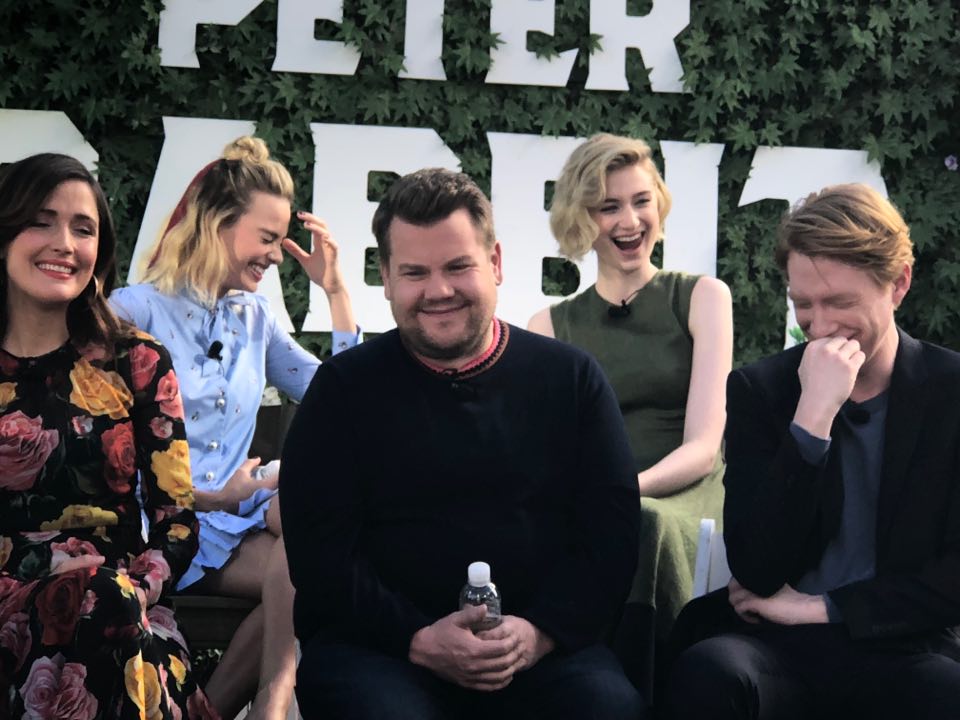 Q: What do you guys think is the sweet spot in terms of age range for this movie?

Dir: From 2 to 98! Anything other than that I would say stay away.  There is a lot of stuff for both kids and adults, but you are never going to feel left out in this movie. There is never a joke or a scene that is just for the adults and the kids don’t understand.  Almost every beat works on both level concurrently, which that took a lot of time with everyone else helping us and we think we hit the sweet spot. It’s a movie where you’re going to have to take your kids to because they are nagging you to, but then you are going to be very excited very early in that it is for you as well. 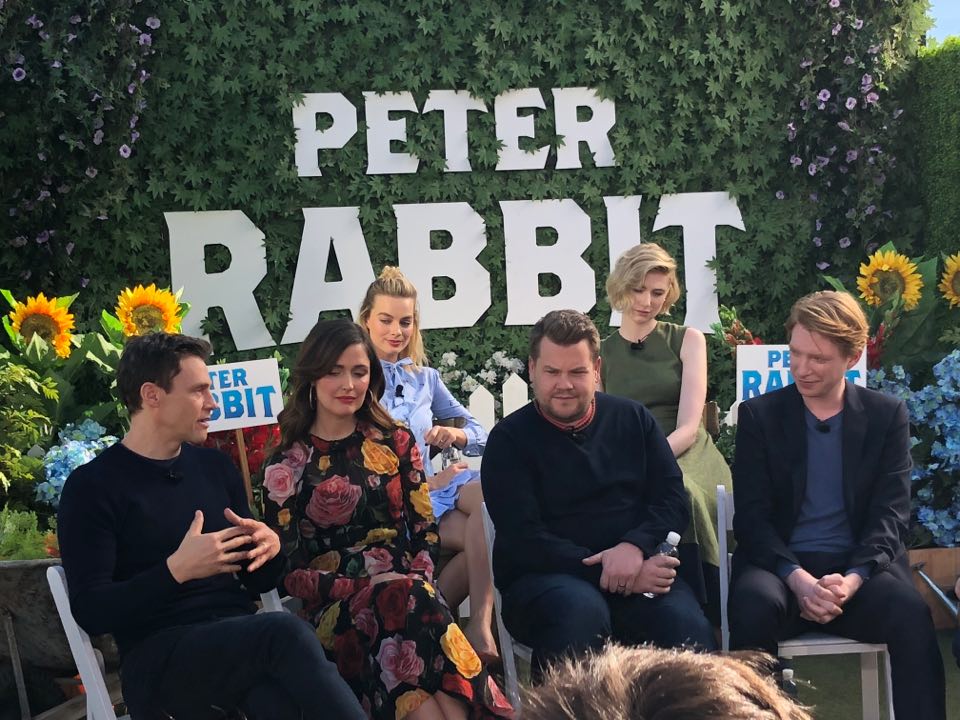 Q: James, Margot and Elizabeth: You guys were obviously in the recording booth for your experience on this film.  Were you able to go off script at all or was it so carefully scripted because of the animation process had already been started?

JC: Well, it hadn’t really. It’s a constant sort of moving phase in terms of that. I think the first thing we did was lay down the voice and then animators started to work to that and it was only really until it got to the very final finished thing that you had to start syncing to any particular animation so in terms of … I don’t know if you would call it improvisation…it was much more sort of Will and I discussing “is this right?”, “does this feel right?” and trying stuff and see if that was right.

Also, trying stuff going into a cut and watching it as a whole and saying “no, that doesn’t feel quite right, we should take that bit out and change it.” It was a constantly evolving feast really, which actually made the whole thing feel really organic. It never really felt like you were tied into just speaking into what had already been animated and done. It always felt like it was moving and evolving.

ED: I think part of Will’s genius is that he is so spontaneous when you are recording and that was really fun.  You know, we would try a line, but then maybe there was a funnier version or funnier word or pitch it in a different way.  As an actress, it’s a real workout vocally and mentally because you are just throwing things all over the place and seeing what sticks and that’s sort of the joy of watching it for the first time and to think about what ended up being used.

Q: Margot, tell us about the lisp. Where did this lisp come from?

MR: I think the lisp was always in the script.  I loved it though. There is something quite endearing about a character with a lisp and you can understand where her frustration comes from sometimes as she cannot articulate herself in the way that she wants to, but more than that she is trying to win a status quo with her sisters sometimes and that is a fun thing as I grew up in a big family with lots of brothers and sisters and I love that dynamic of who gets the front seat, who’s the oldest and that sort of thing. I could relate to it and had a lot of fun with it.  I am the third of four, so I know what it is like to try to find the powerplay in that dynamic. 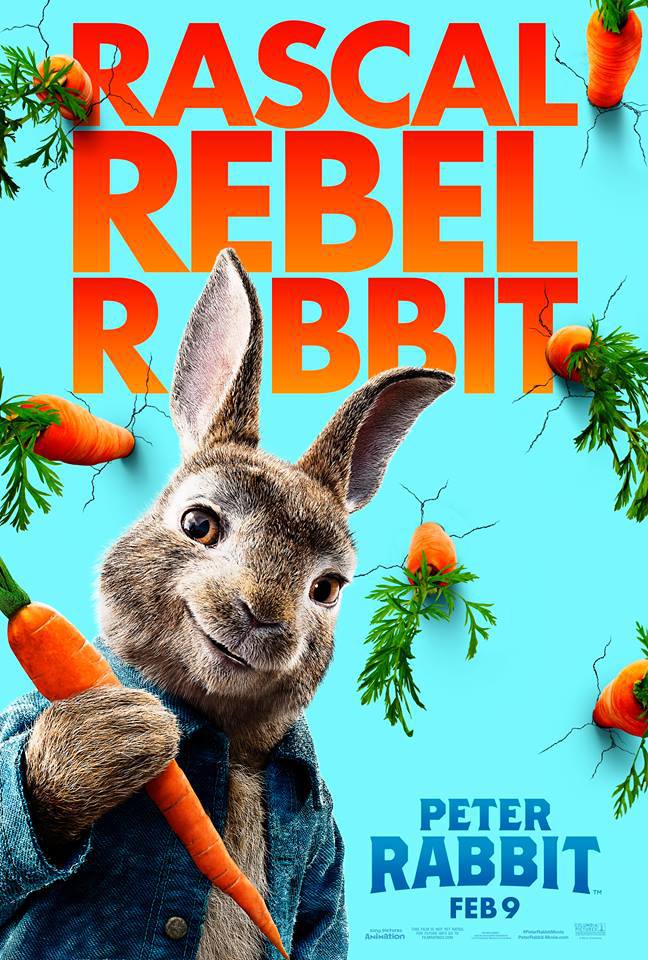 Be sure to watch the Peter Rabbit Official Trailer here:

We’ll have all the details from the Red Carpet Premier as well as thoughts on the movie after we saw a prescreening last week! Be sure to check back!