Have you heart of Vtech Switch & Go Dinos?
My boys and I recently had the chance to play with a few of the new Dinos and they were so much fun! 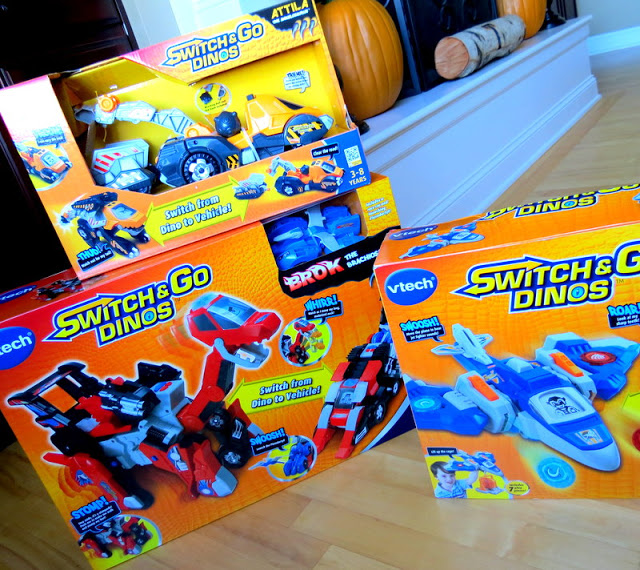 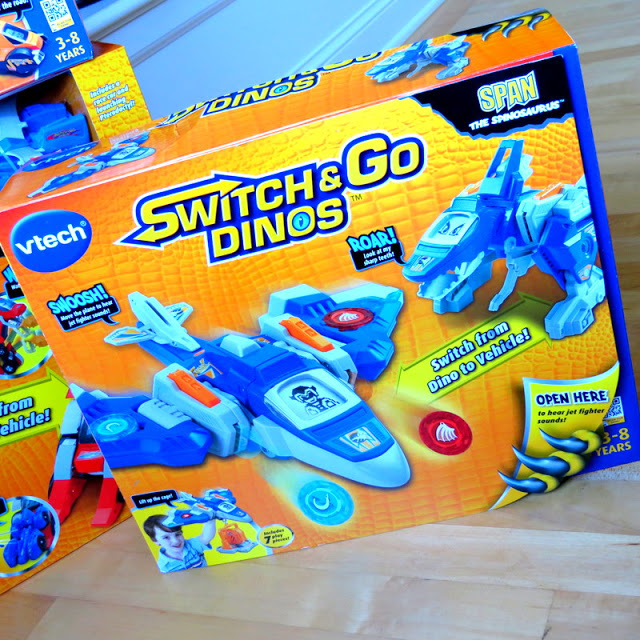 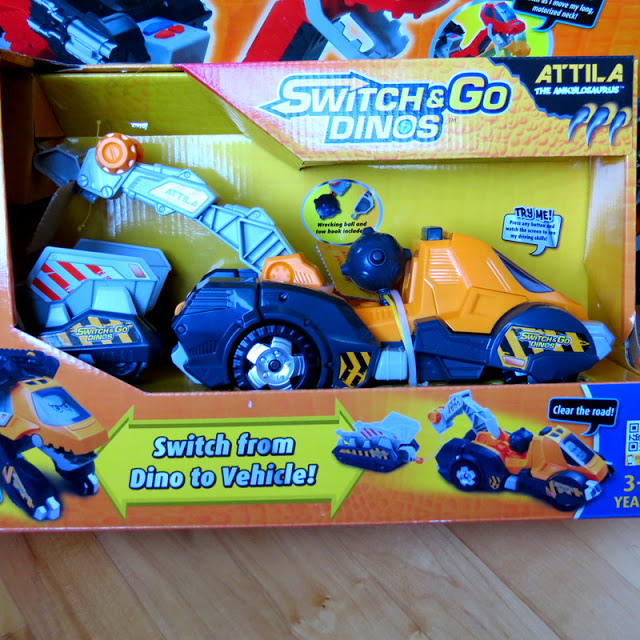 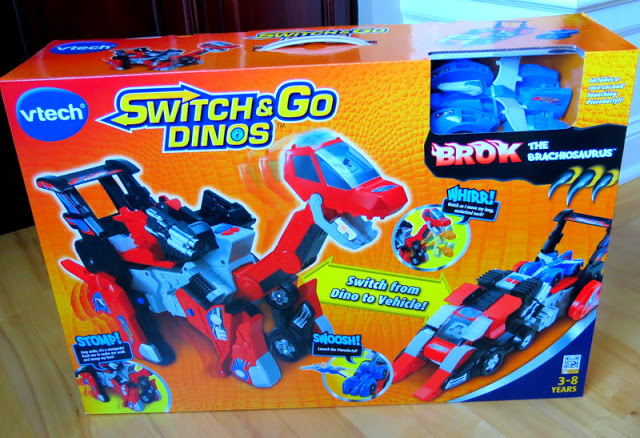 Meet Attila the Ankylosaurus ™
The dino who never backs down from a fight, Attila the Ankylosaurus can get you out of any jam!  In the dinosaur mode Attila comes equipped with a tail that swings back and forth with the press of a button, and can be heard making dramatic dinosaur sounds and sharing 30 fun expressions, like, “I’m an herbivore. I chow down on plants” and, “I’m built like a tank with armor all over my head, back, and sides.” Boys can customize Attila by selecting from four animated dinosaur faces on the LCD screen.  In 5-6 steps, Attila transforms into a construction vehicle complete with a movable crane. Included are two accessories that plug into the crane: a wrecking ball and a tow hook. An accessory truck is also provided, which doubles as spikes and armor in dinosaur mode. These accessories, together with Attila the construction vehicle, create a realistic construction set for boys. In vehicle mode, Attila makes several sounds and yells up to 30 phrases, like, “I’m a one man wrecking machine,” and, “Yahoo!” Boys can customize the driver in the Attila vehicle by choosing from four animated faces. 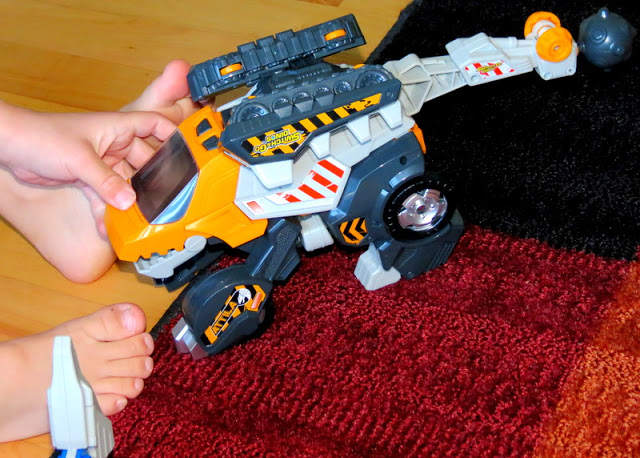 Meet Span the Spinosaurus ™
Cool, confident and fun, Span’s sense of humor will keep kids laughing!  In dinosaur mode, Span lurches forward with the press of a button on his tail. He comes equipped with a crane and rescue cage for other Switch & Go Dinos, as well as a small dinosaur that is included. By pressingaction buttons, Span will teach kids about himself, saying up to 30 expressions like, “Hi, they call me spinelizard because of the long spines on my back.” He’ll even share jokes like, “What’s up! I’m Span the Spinosaurus. Nice to eat you! Er, I mean, meet you! Heh, heh!” Boys can customize Span by selecting from four animated dinosaur faces on the LCD screen.
It’s time for takeoff! Span the Spinosaurus provides double the fun when he transforms from a dinosaur to a plane. The plane is equipped with sensors to detect movement and respond with exciting flying sound effects. Kids can practice landing with the included landing gear, and have fun with launchers that send out discs of food. As a plane, Span can be heard shouting up to 30 phrases like, “I’m faster than the speed of sound!” among other fun facts and vehicle sounds. Kids can select from four animated driver faces to customize their experience. 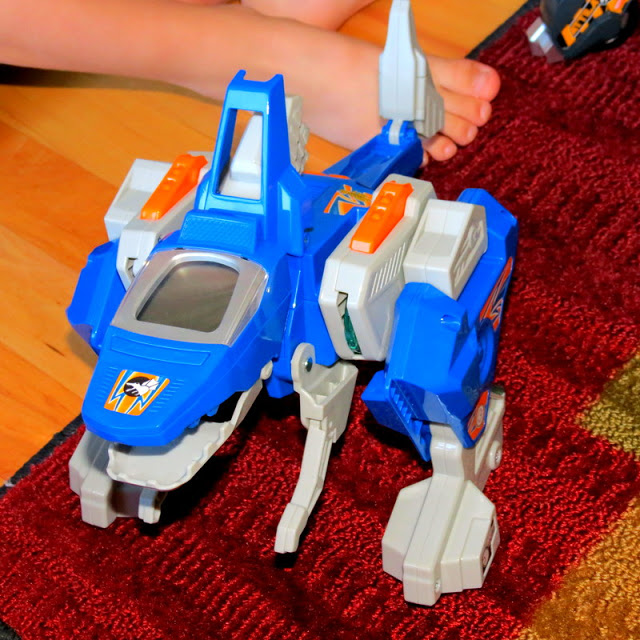 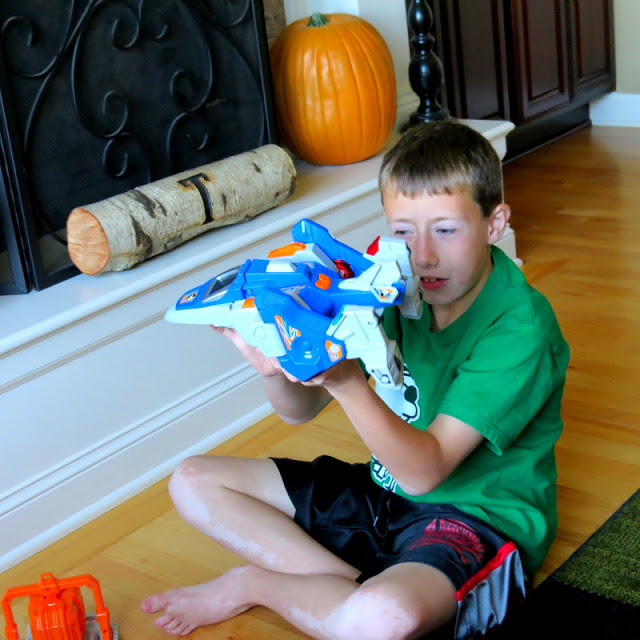 Meet Brok the Brachiosaurus ™
Easygoing and rugged, with the personality to reflect it, Brok the Brachiosaurus is the ultimate dinosaur vehicle!  Equipped with a motorized neck and legs that move up and down while rolling across the floor, Brok the Brachiosaurus is pretty easygoing, but don’t get on his bad side! With the press of the action button, Brok will make dramatic dinosaur sounds, and say more than 40 phrases like, “I’m large and in charge!” or an educational fact, including, “The name Brachiosaurus means arm-lizard.” Boys can customize Brok by selecting from six animated dinosaur faces on the LCD screen.  Within 6-7 simple steps, Brok easily transforms into a vehicle. In this form, Brok can interact with other Switch & Go dinosaur vehicles, as he serves as a car carrier equipped with a launch pad to send vehicles flying. Brok also comes with an included smaller race car that launches a flying dinosaur when sent down his ramp. In this mode, Brok makes vehicle sounds, and says up to 30 expressions like, “Keep on truckin’,”and, “Saddle up partner,” among others. Six animated driver faces are available for customization. 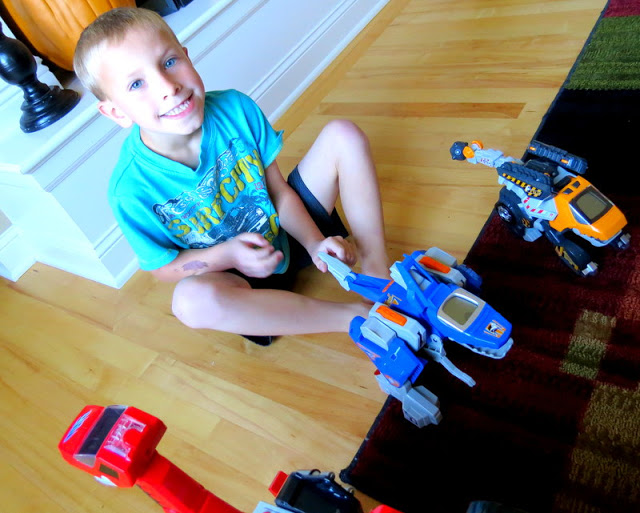 My boys have loved playing with these new Dinos, in fact I have been pleasantly surprised by the amount of time they are spending together playing.  The Dinos are easy to transform and have so many different functions.  They also speak facts on dinosaurs, so they are educational as well.  From a parents view, they were fairly easy to assemble and have provided hours of fun for my kids.  That qualifies as a great toy!

VTech is also having something really cool going on right now, too – it’s called the VTech’s Show & Tell with Switch & Go Contest they’re running on their Facebook page:
Switch & Go Dinos are all about TRANSFORMING kids’ imaginations, and we’re excited to give kids the opportunity with the Show & Tell with Switch & Go Video Contest. We want your kids to use their imaginations to see what cars and dinosaurs they would combine. Your kid can win a kids’ lifetime supply of toys, your video on Nickelodeon and a viewing party with your friends and family.

From August 22 through October 1, visit: https://www.facebook.com/vtechtoys/ to enter.

I participated in a campaign on behalf of Mom Central Consulting for VTech. I received VTech Switch & Go Dinos product samples to facilitate my review.